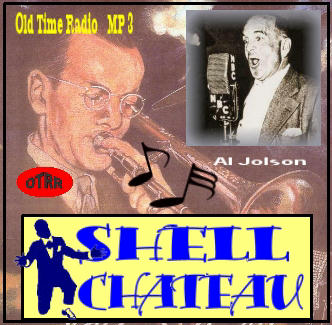 Shell Chateau was a musical variety series that began on June 29, 1935, with Al Jolson serving as its host. Some sources even mention that the program was developed around Jolson and his talents. However, Jolson left the series briefly in the fall of 1935 due to a movie commitment. Wallace Beery, one of the country’s most popular film stars of the period took over the host position following a one week stint by radio newsman, Walter Winchell. Jolson returned in January of 1936, but didn’t hang around for long and departed permanently in April 1936. Based on a recommendation by the program’s music director, Victor Young, Smith Ballew was installed as the new host and remained with the program for the remainder of 1936. Smith Ballew had previously worked extensively on records with Victor Young; they had been friends since 1926. The Shell Chateau program appears to be one of Ballew’s last gig’s as a big band musican and he started carving out a name for himself as an actor, when Sol Lesser invited Ballew to do a series of 'B' Westerns for Twentieth Century Fox as a singing cowboy. In 1937, the program was reorganized around the Legendary Broadway comic Joe Cook. The essential format remained the same until the series ended in June 1937. It’s unfortunate that this certified series is missing the episodes featuring Walter Winchell and Joe Cook, perhaps one day representative episodes will became available. And now a few brief comments about the series and Al Jolson: Al Jolson was known in the industry as "The World's Greatest Entertainer," for well over 40 years. During that time such performers as Bing Crosby, Frank Sinatra, Judy Garland, and many others spoke of Jolson in this way. After his death his influence continued unabated with such performers as Elvis Presley, Mick Jagger, David Bowie, Jackie Wilson and Jerry Lee Lewis, all mentioning Jolson as an inspiration. Jolson on radio faired better, at the time of the Shell Chateau broadcasts, than in the movies. Though Jolson ushered in the sound era in movies with the landmark 1926 film, “Jazz Singer” for Warner Brothers. Critics generally viewed his screen appearances as a pale ghost of the stage Jolson. On film, with a few exceptions, Jolson come across as stiff and wooden. He continued into the 1930s making but was most popular on radio. This situation continued until the mid 40s when Columbia Pictures, inspired by the success of its film "Yankee Doodle Dandy," decided a Jolson biography might work as well. So in 1946 Columbia rolled out TheJolson Story, starring Larry Parks miming to Jolson's vocals. It was the surprise smash hit of the season, and the highest grossing film of the year. Parks received an Academy Award Nomination for Best Actor. Because of the film, Jolson was now as big, or bigger, than ever. Al Jolson had a life-long devotion to entertaining American troops, servicemen and women, and against the advice of his doctors, agreed to entertain the troops in Korea in 1950 it was during this overseas tour that his heart began to fail. He died on October 23, 1950, in San Francisco, California at the age of 64, evidently of a heart attack, and was interred in the Hillside Memorial Park Cemetery in Culver City, California. On the day he died, the bright lights of Broadway were turned off for 10 minutes in his honor. From the Old Time Radio Researcher's Group. See "Note" Section below for more information on the OTRR.


This is the Single Episode Page. The Certified Set includes extras not found here. It is located at OTRR Certified Set. This page is provided in case you want to sample the shows.

Reviewer: Alonzo Church - favoritefavoritefavorite - December 16, 2012
Subject: Valuable Nuggets Can Be Found Here
Variety shows of the 30s are a mixed bag in general -- horrid skits alternate btween bad jokes and then a marvelous musical number will pop up, or a worthwhile guest star moment. This is no exception.

In this show, the highlights, at least for this listener, is a 12-year old Judy Garland nailing Zing Went the Strings of My Heart, and a three tune set by the Cab Calloway band in one of the early 1936 shows, which really rocks the house. Al Jolson is an acquired taste I never acquired, so his frequent songs left me cold. Others may disagree. All can agree, however, most of the comedy is bad.

Best way to attack these is with a fast forward key (or with a tolerance for bad jokes), and concentrate on the music, or the occasional bits of dramatic acting. (Herbert Marshall has a good bit in the show fraturing Calloway).